skip to main | skip to sidebar

Prop 37 - Why Do You Want To Know What You're Eating When Corporations Are Happy To Decide For You?!

If you want to read the full text of Proposition 37 and see how much money has been raised and by whom, check out VotersEdge.com.

I'm on a diet right now but I just figured out what I'll be eating the first day off the diet - Ben & Jerry's newest Fair Trade flavor, Late Night Snack!

CONGRESS VOTED TO REPEAL YOUR HEALTHCARE TODAY (REST ASSURED, THEY'RE KEEPING THEIRS)

Congresswoman Gabrielle Giffords will be flown from Arizona to Houston, TX for rehab at the end of this week.

Isn't it wonderful that on top of this unspeakable tragedy that they don't have to deal with insurance hassles, bills piling up due to lack of health insurance, accepting treatment because it's the best they can afford instead of what is best for her?

How ironic is it that the Republican led Congress voted unanimously (every single Republican member of Congress voted the same way - yes, that's right Republican's heard the American people who wanted more bi-partisanship and then voted lock-step with the GOP agenda) today to repeal the Health Care bill?

What I have heard more than any other sentiment regarding this issue is that politicians should forego their government sponsored and subsidized health insurance.  What I have never heard, is one of them writing and introducing that bill.  Why?
Posted By: Green In OC at 9:12 PM 0 COMMENTS

This Martin Luther King, Jr. holiday I'd like to introduce you to or remind you of, an amazing man, Bayard Rustin.
He was an incredibly influential person in the civil rights movement.
As a student of Ghandi, he was responsible for Martin Luther King Jr.'s full embracing of non-violence in all aspects of his life.
The incredible paradox of this man's story is that while he was shaping and pushing the civil rights movement forward, he was being discriminated against within the movement and the world.  He accepted it and continued the fight.
He did not seek or receive any glory but he is one the framers of that movement that history has chosen to forget.
Hopefully in the age of the repeal of "Don't Ask, Don't Tell", and hopefully on the cusp of marriage equality we can all learn the incredible histories of those that have been hidden.
Bayard's legacy is that history is made by real people, that we all have something to say and to contribute.
Posted By: Green In OC at 2:03 PM 0 COMMENTS

WORDS HAVE NO MEANING, UNLESS THEY DO

Do you also remember how she defended Rush Limbaugh's use of the word?  How about, when she campaigned for Governor Perry even though his consultant, Dave Carney, used the word?

Remember how she wrote "Just as we'd be appalled if any public figure of Rahm's stature ever used the "N-word..."  Remember how she supported, radio talk show host Laura Schlessinger's use of the word?

Today, she is speaking out.  Making sure we understand that words uttered by Americans are a light to the rest of the world. She is puzzled, concerned and sad at the irresponsible words that are suggesting that people who incited violence with their marketing materials and words have absolutely no culpability.

Today, she is making sure we understand that the media's supposition that political rhetoric may have played a part in Loughner's actions is reprehensible.

When she speaks of taking of arms she is obviously speaking of voting.

It is important to keep a clear grasp on hypocrisy as you never know when you'll need some.
Posted By: Green In OC at 11:35 AM 2 COMMENTS

Hate is NOT Constitutional in California - Take That Mormon Church!

I haven't said much in a long time but I had to come here after reading the news to share my joy.

Proposition 8 was struck down by the Federal District Court in San Francisco today.

I am so happy for all of my gay friends, even those that have passed on )boy would R have fought this battle with vigor and would have been jumping for joy right now!), gay people everywhere and my fellow straight people.

This is a victory for all of us, as "Injustice anywhere is a threat to justice everywhere", as the wonderful Martin Luther King Jr. once said.  I think of he and Bayard Rustin today.  I think of young people who will grow up in a different world.  I think of those that are for federally mandated hatred and injustice and hope that we can bridge the gap somehow.

I'm sorry this is all over the place, I'm just quickly typing in my joy!

Oh, and Mormon Church?  Neeneer, neeneer, neeneer!!!!  Now, just as you allowed black men to fully join your church (long after you accepted their tithing), please have some of humble pie, prepared by the Relief Society of course, and remember that Primary song, "Jesus said love everyone, treat them kindly too".
Posted By: Green In OC at 3:01 PM 5 COMMENTS 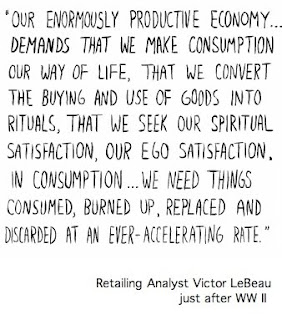 The Story of Stuff
When I moved out on my own for the first time, I like most every other person starting out, had hardly any money.


My "furniture" consisted of crates and boxes scrounged from behind grocery stores garbage bins with sheets, stolen/borrowed from my Dad's house, thrown over them.  Typical.


I moved in during summer and had to keep my front door open because, while the apartment had a window air conditioner, I was terrified of using it, running up my electric bill, being unable to pay the bill, having my electricity turned off and I spiraling into living in my car!  You know, the logical stuff everyone worries about!


Anyway, a neighbor kept walking by my door and sneaking a peek in.  I thought it was a bit odd at first but quickly realized that she walked by my door a lot and was a bit creeped out but the heat won over my suspicions.


After the end of my first week, she approached me saying that she "noticed" that I didn't have a fridge and wondered if I would be getting one soon.  I told her no - the no money thing.  I was willing to engage her because, truth be told, I was a bit afraid of her and her stern look constantly peeking into my house.


She said that her brother had an extra one that I could buy if I wanted.  I laughed.  I couldn't buy anything I wanted.  She replied that she figured that and had already spoken with him and he would charge me $40, I could pay $5 per month, starting the next month and he would deliver it anytime I wanted.  WTH?!  Her "stern look" turned out to be worry for me, a stranger!


Wow!  I could not believe my luck.


Her brother arrived the next day with the ugliest fridge ever made.  It was dark brown with some yellow/gold accents and gold trim on the door handles.


This is not a picture of my fridge, but this picture was definitely the prettier cousin in my fridge's family: 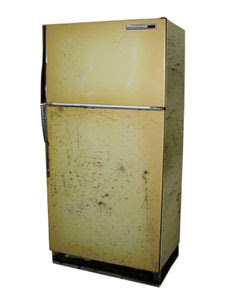 I payed off my debt to her brother and was so happy to have a fridge, albeit an incredibly ugly one.


I moved to my next apartment and took my fridge and few pieces of "real" furniture I had acquired.  I did leave behind the waterbed (i.e. gigantic baggie filled with water), my boyfriend so generously bought for "me".  Should I have been insulted that he found it in the Pennysaver for $50?!


I moved to another apartment, taking the fridge and by then, a television too!


I moved again, this time to a cute duplex, and again, took the fridge with me.  My brother, strongman that he was, lifted that fridge by himself on both ends of that move.  On New Years Eve day to boot!


I moved again, this time with a friend who had just bought his first house and needed someone to move in and pay rent so he could afford the mortgage.  The fridge was a lifesaver because he could not afford one at the time.


I moved again and took it with me when I bought a house.  Back to the same financial situation when I first moved out on my own - zero extra money.


As the years wore on, and I had a little extra cash, I began to really hate that fridge.  Not because it didn't work well.  In fact, the fridge NEVER, not even once, gave the slightest hiccup of trouble.  I hated it because it was ugly.


I grew tired of the too big for my kitchen ugly brown from the very early 1970's fridge.  I was being vain.  I wanted a fridge to match my dishwasher and stove.


Every time I looked into my kitchen I resented the solid but ugly fridge.


I started looking for new models.  I ogled stainless.  I admired the brilliance of a bottom freezer drawer.  I nearly wept at the sight of french doors.  An ice maker AND a water dispenser?  Oh, my! 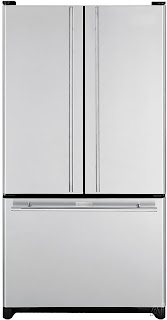 The delivery guys arrive and carefully brought my gleaming $2,000 fridge up my stairs.  They chuckled when they saw the fridge it was replacing.


Good riddance to my dependable but shockingly ugly fridge that worked perfectly well when they unplugged it.


Planned obsolescence is for printers, PC's that you buy from Costco, men that you meet at bars.  Certainly not for expensive, well made appliances.  Right?


It can be fixed.  Hallelujah!


I had stupidly disposed of a perfectly good fridge because I didn't like the way it looked or functioned in my kitchen.  Into the landfill it went.  Foolishly, I never even gave it a second thought.  All because I lusted after stainless, french doors, beauty, etc...


After much research I am about to replace my too expensive, foolish fridge.


It will be here by the beginning of next week.


While I wish I didn't have to buy a new one so soon, I am excited about my choice.  Once it arrives, I'll tell you all about it!
Posted By: Green In OC at 11:04 PM 0 COMMENTS

Green In OC
Orange County, California, United States
Swimming upstream by trying to live green and frugal in OC, the county of spend so your neighbors think you're rich mentality. There will be the occasional foray into politics - mainly when something really chaps my hide!

Green Toys Made In The US From Recycled Milk Jugs!

Amazing Glass Straws Made In The US!